Bee venom is made by bees. This is the poison that makes bee stings painful. Bee venom is used to make medicine. Don't confuse bee venom with bee pollen, honey, or royal jelly. Other venoms are derived from related members of the insect order Hymenoptera.

Bee venom is given as a shot for rheumatoid arthritis, nerve pain (neuralgia), multiple sclerosis (MS), reducing the reaction to bee stings in people who are allergic (desensitization) to them (venom immunotherapy), swollen tendons (tendonitis), and muscle conditions such as fibromyositis and enthesitis.

How does it work?

Giving repeated and controlled injections of bee venom under the skin causes the immune system to get used to bee venom, and helps reduce the severity of an allergy to bee venom.

USES AND EFFECTIVENESS Likely Effective for... 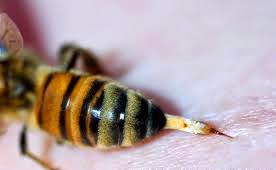 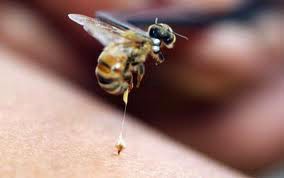 Arthritis. People used to think that bee venom might be a useful treatment for arthritis. This theory was largely due to supposed swelling-reducing (anti-inflammatory) effects of bee venom and the observation that many beekeepers don't develop arthritis. However, research results have not supported this.

More evidence is needed to rate the effectiveness of bee venom for these uses.

Bee venom is safe for most people when injected under the skin by a trained medical professional. Some people might get redness and swelling where the injection is given. Side effects include itching, anxiety, trouble breathing, chest tightness, heart palpitations, dizziness, nausea, vomiting, diarrhea, sleepiness, confusion, fainting, and low blood pressure.

Side effects are more common in people with the worst allergies to bee stings, in people treated with honeybee venom, and in women.

Live bee stings have been safely administered under medical supervision in doses up to 20 bee stings three times weekly for up to 24 weeks.

Pregnancy and breast-feeding: Bee venom seems to be safe when injected under the skin by a trained medical professional at recommended doses. Though harmful effects at usual doses have not been reported, some healthcare providers decrease the maintenance dose by half during pregnancy. High doses of bee venom are UNSAFE during pregnancy because they can increase release of a chemical called histamine, which can cause the uterus to contract. This might lead to miscarriage. Avoid high doses of bee venom if you are pregnant.

“Auto-immune diseases” such as multiple sclerosis (MS), lupus (systemic lupus erythematosus, SLE), rheumatoid arthritis (RA), or other conditions: Bee venom might cause the immune system to become more active, and this could increase the symptoms of auto-immune diseases. If you have one of these conditions, it's best to avoid using bee venom.

The following doses have been studied in scientific research:

For reducing the severity of allergic reactions to bee stings: Healthcare providers give bee venom as a shot (by injection) to "desensitize" people who are allergic to bee stings. Purified bee venom for under-the-skin injection is an FDA approved product.